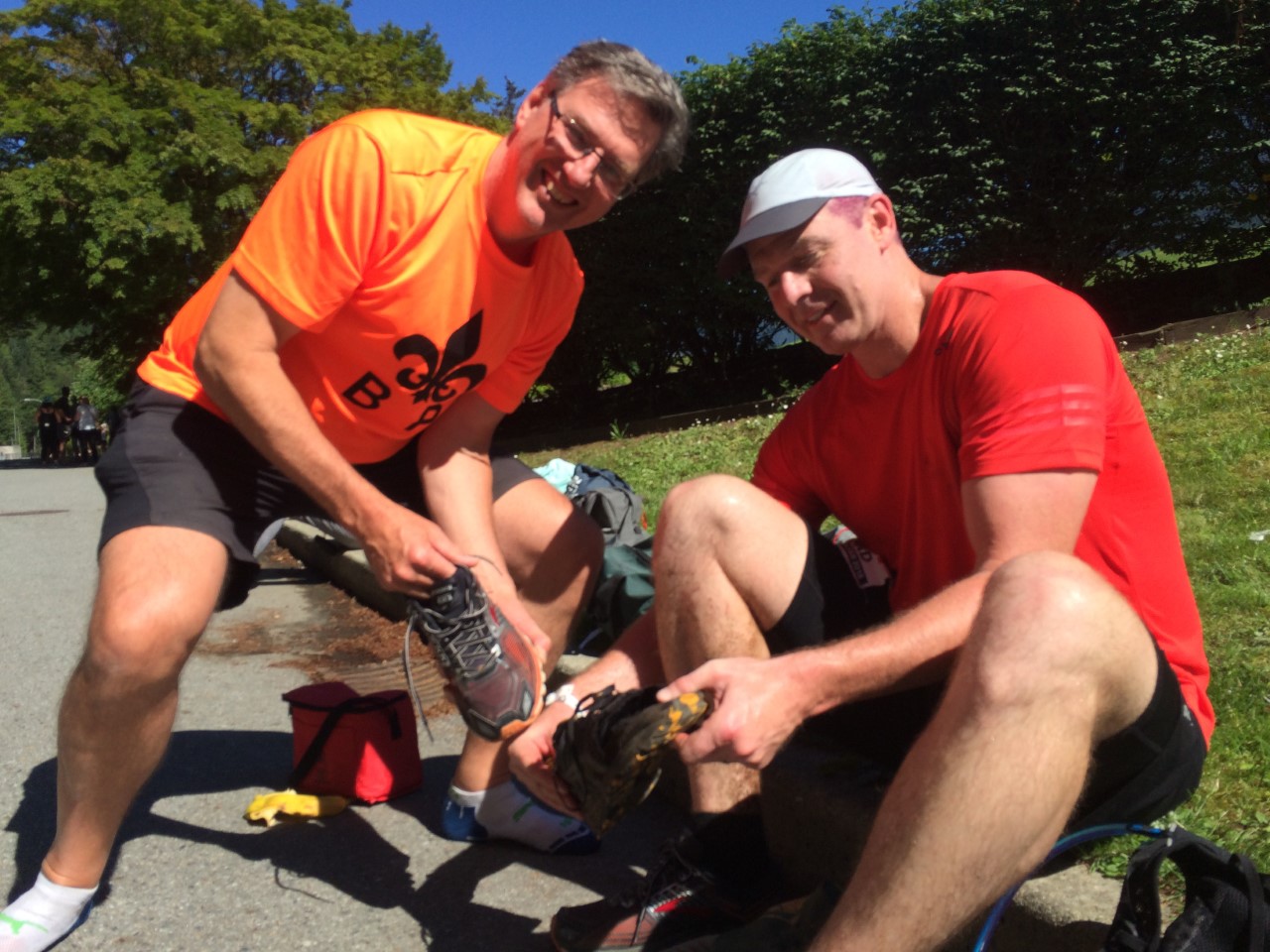 Volunteer giving his own shoes to a runner, Knee Knacker 2018. Photo by Ellie Greenwood.

The 30th running of the of the Knee Knacker, this past Saturday, July 14, 2018, was a   day to remember. In some magical way, the 30 running since it’s 1989 inception, brought about a palpable positive energy in runners, organizers, volunteers, and even surprised public trail users. Smiles, happiness, and generous cheering were abundant making the 30-mile experience rich and memorable for everyone from the winners to those who continued to run past the 10-hour cut-off.

With its 8000 feet of climbing, the Baden Powell trail was in ideal shape. With the snow gone and only a few muddy sections, it was prime for some fast times. The 6 a.m. start saw precious cool temperatures but the mercury slowly rose to 27 degrees and by noon runners began to feel the heat having an impact on their bodies. Many complained of cramping muscles and were elated to arrive at aid stations to find sponge baths, ice, water, and even Freezies, delivered to them from costume-clad, smiling volunteers. With volunteers like this, it’s no surprise that when one runner’s shoe had split open by the midway point, one of our volunteers, Craig Siemens, took off his own shoes and had Chad Oliver finish the race in them. Knee Knacker draws amazing volunteers every year. Some of them are runners, like Ellie Greenwood, women’s course record holder, and others that are simply excited to spend their entire day in the mountains helping other people achieve their goals. If you were out there on race day you were sure to be surprised by pirates on Black Mountain, a fairy-filled forest at LSCR, kids with signs and high fives, or a brilliantly happy volunteer dancing in a yellow jumpsuit on Mount Seymour road.

Knee Knacker prides itself in the fact that about 50% of the field is made up of first-timers, who race director Kelsy Trigg very fondly calls “Newbies”. This speaks to the community reputation of Knee Knacker, the inviting nature of the Baden Powell Trail, and the unprecedented support Knee Knacker gives one in the challenge of an ultramarathon. It is for these reasons that Knee Knacker alumni celebrated several milestones this year. Paul Cubbon celebrated his tenth, Ean Jackson for his 26th, Keith Wakelin for his 25th, and Neil Wakelin for his 28th. People just keep coming back.

The incredible achievements of all runners were celebrated at the Panorama Park finish line with food, drinks, and one of the most scenic backdrops one could ask for. In honor of this being the 30th year of Knee Knacker, a Lifetime Achievement Award was given to race co-founder, Enzo Federico.   Not only did Federico, along with his co-founder, bring together the original eight runners, he has passionately inspired and mentored many along the way. In typical ultramarathon fashion, Federico was presented with a big, shiny belt buckle. In addition to Federico’s award, Karen Chow was awarded the honor of Volunteer of the Year. Karen has been photographing this race for 15 years and is always smiling and cheering to get the best out of everyone she photographs.

Proceeds from this year’s race benefit the North Shore Rescue (NSR) team. This year the event continued with a fundraising component to encourage racers to collect individual donations to support NSR who not only support us on race day but every day we’re out there in the mountains, forests, and streams of the beautiful North Shore.