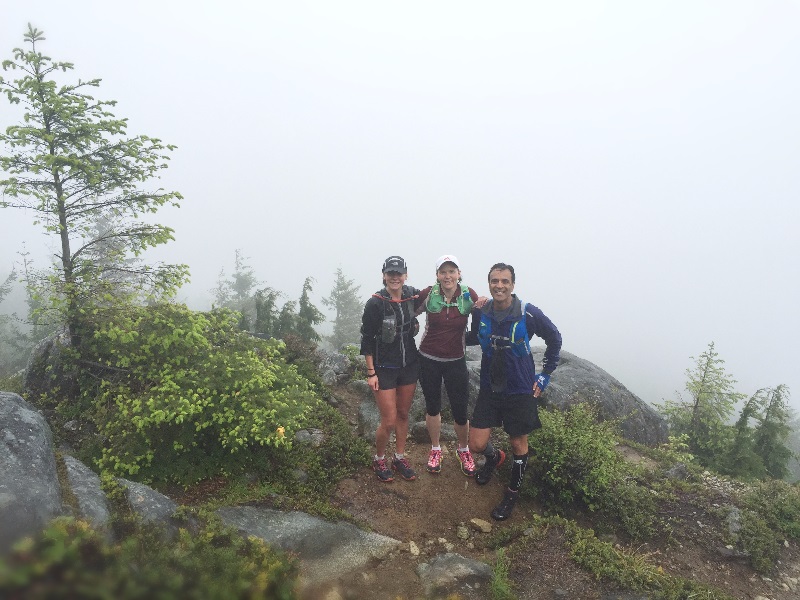 From here on in, I will shut my mouth about the weather….no need to jinx it again.

It wasn’t the worst we’ve ever seen on Black Mountain, but it was far from the best. The clouds, mist, and rain did their best to obscure the view from the almost 100 runners who showed up for our first clamber over the peak this year.

It’s always a popular training run for a variety of reasons. Throughout the training cycle we start to see a lot of familiar faces, but the Black Mountain training runs always brings out some new faces. Whether it’s for the Knee Knacker or other goals, some people are happy to train on their own, but Black seems to be the place where you want to have a few experienced people with you. Experience may give you some sense of comfort, but it doesn’t guarantee an easy way through, nor a perfect sense of direction….snow and mist made sure that more than a few people took alternative routes.

After herding the masses at Kilmer park for the car shuttle (confusion over the new parking regulations at Lynn Canyon), we found ourselves at the (expanded) start area of Nelson Park. Although the weather wasn’t looking promising, it was relatively warm at the base of the mountain. With all of the runners that we had on hand, it almost felt like the start of the real race. We wound around the corner and found Salvador shooting video from the top of one of the water towers. From there, we continued in a Conga-line up through the fern canyon of Nelson Creek.

The climb went relatively easily, but I must admit that – no matter how fit I am – the first 40 minutes always makes me feel like my lungs are constricted, and my legs are burning….after 41 minutes, all is fine. So up we went. The folks who had never been up this way before were constantly asking “how far are we?”. With all reference above and below obscured by clouds and mist, I could understand the concern.

Eventually, we made it up to Eagle Bluffs and admired the…clouds? The wind was whipping the exposed rocks, so after a couple of quick photos, we headed into the shelter of the trees and on to the muddy and rooted trail before quickly finding the rest of it buried in snow. There had been enough footprints to follow, but some of them wandered off route….the only sure way, was to look for the BP trail markers…which at some points were hard to see. More than a few people did an extra lap of the plateau before finding the true summit of Black Mountain and then the trail to the parking lot. That downhill can be brutal on the quads and the knees, but the snow was a blessing…..once again, we found Salvador recording the event for posterity.

Once at the Cypress downhill parking area, runners had the option to continue to follow the Baden Powell trail, or to avoid the unknown conditions and run the road to the X-Country area. Many opted for the road option.

As my race duties include course marking and runner safety on race day, I opted to check out the Hollyburn section of the trail. To my surprise, it wasn’t as bad as some of the reports that I had heard. Many of the creeks were snow free and safe to cross. Back in 2011, I remember dropping ropes into a few of the creeks for race day as they still were choked with snow. I am happy to say that there is much less snow already this year. My only concern is a dilapidated bridge at the final creek crossing. We will address that for the race, but it will be impossible to do anything until the final week…..part of the excitement of trail running!
We continued through the snow at the cross country trails. At times, it felt like we were running on sand, but it was easier on the legs than the constant pounding that a solid surface would offer. As we got to the end of the snow, Scott and I bumped into fellow Knee Knacker committee member, Mark Grist. As a park ranger, he was there on official work-related stuff, but he still had the time to throw a couple of smart-ass comments our way. Thanks Mark. Mark has finished the race over 20 times!

With the end of the snow, we all flew through the Chute and down to Cleveland Dam. What a difference a week makes. No more sun, no more fresh legs….we got to experience the real nature of the climb up Nancy Greene Way. Whereas last week saw many people trotting up the hill, this week was a much more “paced” speed. Personally, I was feeling the cumulative effects of the climbs as I made my way up the Grouse section of trail. Scott was feeling quite fresh, so he motored up ahead (note: there are no friends on race day) as I pushed on at my preferred pace. I have mentioned this during any training runs, and it holds true….this is the section that gives people the most grief on race day. Accept it, and move on.

As I got to the section past Mackay Creek, Christine caught up to me. We had a good talk about skiing, running, etc…As we were chatting along a steep section (somewhere between Larson Trail and Skyline) we heard a crash in the forest above. At first, I suspected a branch or even a tree had fallen. As I looked up, I saw something that I have never seen in over 16 years of running these trails… a BOULDER the size of an oven was rolling down the hill towards us. As it rolled, swerved, and picked up speed, I was unsure as to where it might end up. I saw that there was an edge to the trail ahead that took us out of that particular drainage so I just told Christine to RUN! We got to the corner in no time flat and looked back to see that the boulder had stopped somewhere above the Baden Powell trail. I’m not sure what stopped it…perhaps a fallen log? Regardless, we were pretty much adrenaline fueled and feeling good that nothing hit us.

Eventually the adrenaline wore off, and the fact that we were now 5+ hours into the run sunk in. Christine motored the downhill to Mountain Highway and I plodded forward. My nutrition and fuel plan had seemed to work….as I got into the final climb to the parking lot in Lynn Valley, I was neither hungry, nor thirsty. But I was really looking forward to a cold beer and a warm/dry puffy jacket.

During (as well as after) the run, a few people expressed concern over their time to get through the first 3/4 of the race course. They were shocked as to how long it took…a few were a bit dismayed. Please understand that this part of the training process. You will have a few more advantages on race day…

On Sunday, you get to do Black Mountain again, but the taper has begun. Rest well. Eat well. Relax. The hard work is done.