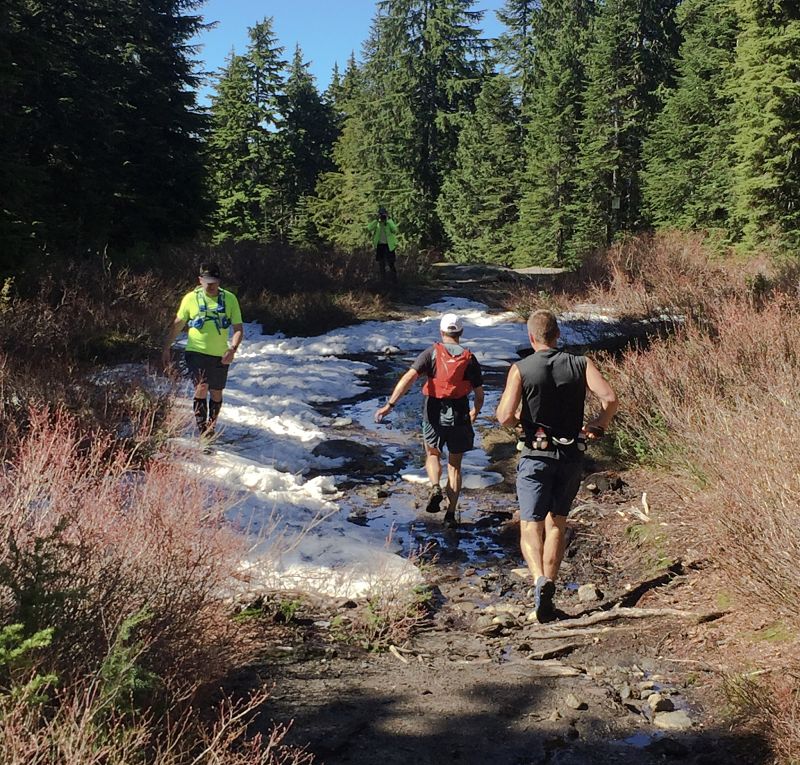 Cypress cross country trails, May 26th 2019 training run. Photo by Glenn Pace.
Well….the Knee Knacker organisers did it again….they managed to align the weekend weather window with some of the most favourable conditions for this long climb up to Hollyburn Peak and back. Saturday’s rain clouds dropped everything they had on the North Shore and left Sunday morning with clear and blue skies.
There were 50 runners ready for what I consider the start of the serious training runs. From here on in, we will be doing long out-and-backs or point-to-point training runs. Nutrition and hydration will be very important, and this is the time to start dialling in your various systems (gear, nutrition, recovery, etc…).
As mentioned last week, the snow pack is quite low this year. Not only was the Hollyburn Chute clear of the white stuff, but so was most of the cross country ski area. I don’t think I have seen it this snow-free in over 13 years. Usually, this section holds snow for quite a long time. Even though it is exposed to direct sunlight, the grooming machinery used throughout the winter, compact the snow and it is very resistant to melting. There have been a couple of years when the Knee Knacker race has had to deal with snow in mid-July. I think it’s safe to say (barring any freak-of-nature-storm) that this year will be a snow-free Knee Knacker.
I took a late start after watching everyone head out. Although I did not run with anyone for an extended period of time, I did catch up to a couple of people and we managed to chat about the race, conditions, strategy, and Mexican food (!), and later on I saw a few folks heading back (flying!). A few runners made it up to Hollyburn Peak, and a few turned around at various marker points. I turned around at the BP signpost before the final climb to Hollyburn. While I am usually a fast descender, I took it easy this time…No real reason other than I was just not “feeling it”. Sometimes you have it together, and sometimes you don’t. I didn’t beat myself up about it….and instead, I just enjoyed the downhill cruise. I even took the opportunity to explore a less travelled  parallel trail to the BP, and filed it away as an back-up (should that section of the BP fall off the face of the Earth).
At the end, it was a 4 hour day and all things considered, I felt like it was a decent enough effort. Decent enough to have earned some Mexican food and a beer or two.
See you next week. FYI, we will be meeting at 7:30 am (NOT 8:00!) at Cove Cliff Elementary School parking lot (directions and details are on the Knee Knacker website). We will be doing a point-to-point run from Cleveland Dam to Deep Cove, so we will need to shuttle our cars between the two spots…..be prepared to drive to Cleveland Dam in the morning, or at the end of the run.
Recover well, and enjoy the week!
Glenn
Share